Harishchandragad enshrine some of the ancient and archaic caves and temples, along with the diverse flora and fauna.


Harishchandragad is a trekker’s delight because of the challenging and arduous trek that it offers. Its distinctive shape and the height at which the fort is located make it a popular tourist spot.

The nature lovers are spellbound by the amazing views that Harishchandragad offer. In monsoons, the visitors travel through the clouds in order to reach the fort. This experience is simply transforming for them. They feel so close to nature.

Harishchandragad has several caves dedicated to Lord Vishnu that was built in the 11th Century. Konkan Cliff is the main attraction here, it a spectacular concave waterfall at a height of 1,423m, its vertical overhang resembles the head of a cobra that provides a 180-degree panoramic view of the surrounding hills.

Other elements of surprise and attraction that Harishchandragad has to include Kedareshwar Cave among others. Harishchandragad is the talk of the town because of this cave as it has a big Shiva Linga, surrounded by water. The water here is very cold and is waist-deep. What makes the Shiva Linga more fascinating is the existence of four pillars around it that are considered to depict the four ‘Yugas’ of life. 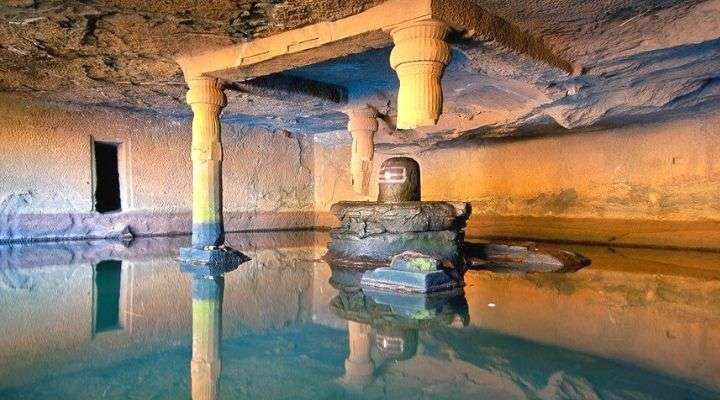 The beautiful Konkan Kada, also known as the Konkan cliff, also enthralls tourists. Visitors get breathtaking panoramic views of Konkan from this cliff. The amazing sunset scene is also marvelous and stays in the memory of the visitors for a long time. Harishchandragad also has a lake called Saptatirtha that has a lot of temple-like constructions with idols of Lord Vishnu.

The topmost point at Harishchandragad is called the Taramati peak. Tourists climb up to this peak to get a clear view of Naneghat ranges and the other forts in the vicinity. Apart from these attractions, Harishchandragad has plenty of caves that were built way back in the 11th century and are a treasure to watch.